I finally got to see Peter Jackson’s The Hobbit: The Desolation of Smaug. I loved J.R.R. Tolkien’s The Hobbit. As a kid, I had the coffee-table size illustrated edition. I actually BLED for that book; I was turning the pages so fast I gave myself a hella papercut.

However, I don’t consider myself a ravening fan-girl. I loved the Hobbit book and songs, and I loved PJ’s The Lord of the Rings movie trilogy as well as the LotR source material, but I don’t have any of it memorized. (Although I admit I read The Hobbit 11 times in a row, it was a really long time ago.) I’m never wedded to canonical purity, and I’m totally willing to go along with a compelling new vision, even of a storyworld I love.

So to say I personify the ideal audience for The Hobbit movies is, I think, no exaggeration. And to say that the movie left me rather flat breaks my heart.

Having seen the first installment, I knew part 2 would be problematic, so my expectations were realistic. Indeed, after reading reviews (carefully, to avoid spoilers — sure, I read the book 11 times, but ya never know) my expectations might’ve been below realistic into low territory. I reminded myself that seeing the movie would at least support the epic fantasy genre. I even made sure to be mildly dehydrated so the 2:40 run-time wouldn’t leave me shifting restlessly in my seat.

And STILL I gave a sad sigh as I walked out of the theater at 1:30 a.m. after the late show.

In Desolation, I have seen the positive power of no at work. Or, in this case, not working.

Not the ability to SAY no — that’s one of the first things you learn as a toddler: nononononono — but the ability to HEAR no. As a storyteller myself, I’m inclined to believe that if only I was allowed to run amok, my creative life would be perfect. If only I could do whatever I wanted, with enormous talent and a bottomless budget and brilliant co-conspirators and an automatically adoring audience, certainly I would create a work to both entertain AND endure the ages.

Not so much, apparently.

Desolation was a gorgeous, thrilling, wonderful movie… stuck in a too-big hooded onsie, under a winter coat and galoshes, overlaid with a wetsuit, tucked into an EVA space suit, rolling inside a half-inflated bouncy house. Seeing the movie that could have been drowning in the morass of what was actually on the screen gave me a new appreciation for editing. Every single scene in the movie — not kidding, EVERY scene — could have been shortened, sometimes judiciously, sometimes brutally. Every speech (with the possible exception of Benedict Cumberbatch’s Smaug, but only because he was so very, very pretty) could have been trimmed. Every action sequence could have been tighter, most of them by multiple beats (which would have neatly gotten rid of some questionable CGI). Entire characters could have been cut without consequence.

The moviemakers just needed to hear no.

No, the movie shouldn’t be two hours and forty minutes. Heck, now that we think about it, no, it doesn’t need to be a trilogy. No, you can’t have two nearly identical speeches that aren’t even good echoes and you can’t have two nearly identical action sequences involving log rides. And while we’re saying no, no, you aren’t designing an amusement park, you’re making a movie. No, there aren’t that many orcs in existence who can’t land a single bloody blow. No, you don’t need that weak and undermotivated love interest story. (“But at least we added a character with woman parts, so of course she had to fall in love with someone for no fucking reason…” Gah.) No, we aren’t buying that cool special effect app just so you can use it on something that doesn’t even fit into the image bible you’ve already established. No, somebody doesn’t need to say something in a ringing voice because this is the story beat where somebody always says something in a ringing voice. No, we’re not randomly shoehorning this character even if certain fan-girls want it so bad. Okay, yes, you can sneak your cameo in the establishing shot, but it won’t be self-indulgent because on everything else that makes the movie feel slow and unfocused we are going to say no and you are going to hear it. No. Nonononono. Just… no.

In January, I’m writing one story and revising two more, so this lesson really hit home for me. (Hit home like one of Tauriel’s arrows, not like an orc blow which apparently can’t land EVER.) Not that I am anywhere near as indulged as PJ — tragically — but in my own little creative realm, I sometimes want to go easy on myself. And that’s no good.

No one wants to hear no. It sounds so… limiting. But hearing no shouldn’t stop you. No indeed! No is where we find the problems. It’s where we cut what doesn’t work. It’s where we find new ways around and over and through. It’s how we fight to a yes. An enthusiastic, unconditional, orgasmic yesyesyes!

Hearing no can be sharp and painful, honing back to the bone, but it’s the difference between a bloated, soft, weak hobbit who never would have left the Shire and a hot, sleek, glittering dragon who’ll burn everyone’s lowly expectations to the ground. That cutting NO creates the negative pressure that gives lift to the dragon’s wings.

So I’ll be taking NO and running with it like scissors — like Bilbo’s little Sting! — excising the bloat, slicing away the unnecessary, carving through to the shiny gold center. The power of no is a power I will use for good.

But I suppose the real question is, will I see the third Hobbit movie? Well, YES 🙂 I mean, c’mon, it’s The Hobbit!

HOTTER ON THE EDGE, the science fiction romance anthology I’m in with awesome authors Erin Kellison and KC Klein, went free at Amazon. Probably for a short time, so get it while it’s HOTTER! 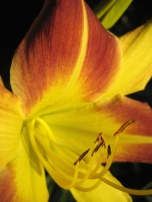 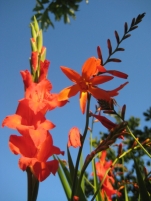 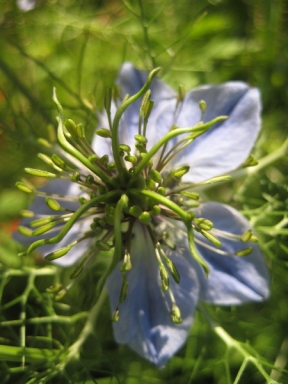 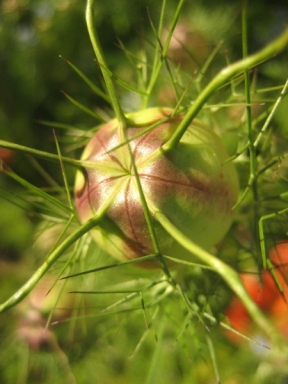 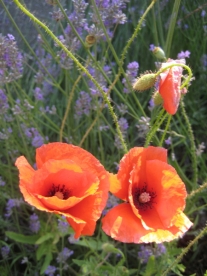 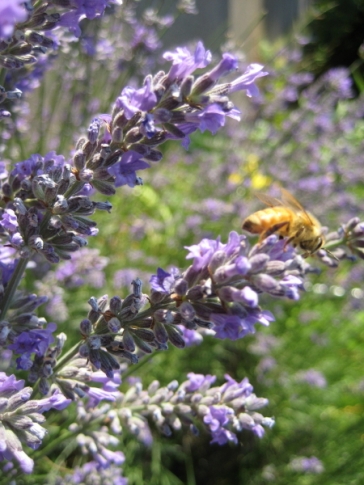 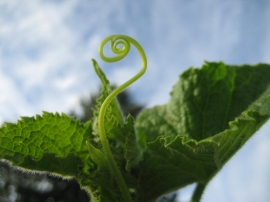 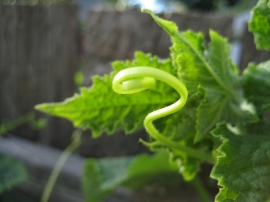 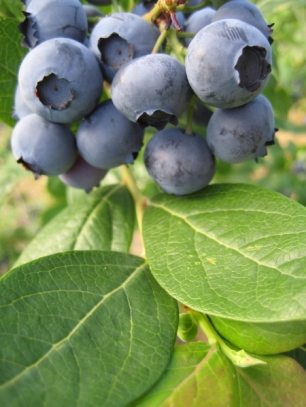 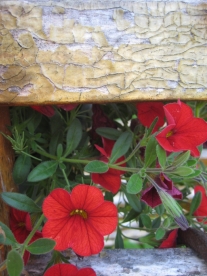 [Note: Here’s an old newsletter article I wrote for Rose City Romance Writers that I found while looking for something else on my hard drive. I’m still having the same troubles!]

Summer is a terrible time in the Pacific Northwest. Terrible for writing, that is.

July through September, the Pacific Northwest offers some of the most spectacularly perfect weather on the planet (all the more marvelous when compared to the weather October through June) with outdoor adventures that range from ocean beach tidepooling to mountain biking to high desert rock hounding. In other words, it can be hard—very hard—to sit inside, staring at a computer, getting words on the page.

As if jaunts to the coast or forests weren’t distracting enough, I’m also a gardener. Gardens can be as all-consuming as a 100,000-word work in progress. In fact, I learned a few writing tips from my garden that help me make the most of summer’s joys.

Like gardens, stories—and writers—often benefit from down-time. In a small but hard-working garden like mine, that period of rest and recuperation is winter, when nothing else is going on anyway. For my writing, I try to time my fallow moments—those times when I’m letting a story sit between revision, when I’m brainstorming a new story (which I equate to plowing under rich compost), or when I’m critiquing my writing partners—when I know I’m going to be distracted by things like sunshine, watermelon (it’s impossible to eat watermelon around a computer), and camping trips.

Despite its small size, my garden has an amazing capacity to grow weeds. The thought of tackling the whole space at once is daunting (and gets me itching for a backhoe and a load of quick-set concrete) so I pick one area and whack at it for a set amount of time, then relax. For example, on a hot day, I weed the shaded north-side beds and reward myself with a popsicle in the sun. Same with my writing. I set myself goals that play to my strengths—and weaknesses. Since I like to laze around on summer mornings, I don’t even pretend I’m going to write. But in the hot afternoon when my black dog is begging to get inside out of the sun, I go up to my office with her and get my words in.

Experiment, have fun and get dirty

In the more sober and contemplative months of winter, snuggled in at my desk, I find it easier to concentrate, kind of like my winter garden pared down to evergreens and stark branches. But all work and no play… Summer in the garden, with its bright colors and sweet fruits, is a great time to try those fabulous tropical annuals, to yank things out and move things around, to go a little wild. Like a solar charger, I read more in the summer, get excited about new stories and take that energy with me back to my writing.

And never worry about excessive summer distractions. Trust me, the rains will return.

While I appreciate smart tech that does what I want when I want it, sometimes it just gets weird. While I was on Grammar Girl‘s site (whom I love for finally teaching me when to use whom vs. who, and who for reasons for which she is not guilty cannot seem to teach me when to use lie vs. lay) this popped up: 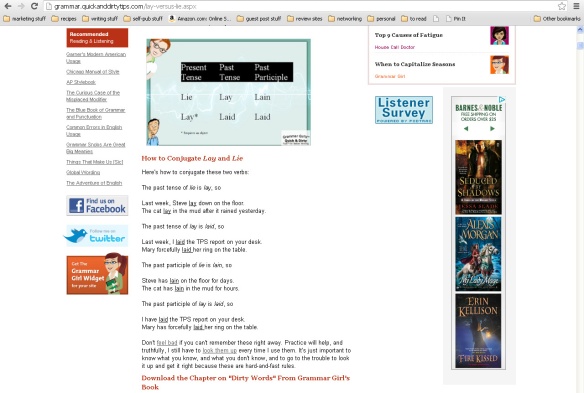 I guess I gotta give Barnes & Noble’s widget credit for knowing what I like to read. All three of these books are already on my bookshelves. I’m pretty sure Alexis Morgan and Erin Kellison have always used lay and lie correctly, but you can go count how many times I wrote in circles to avoid using lay or lie in Seduced By Shadows.

I’m over at Maggie Jaimeson’s blog today talking about hope, passion and naked mole rats. These things happen. Oh, and I’m giving away an ebook of DARK HUNTER’S TOUCH so don’t forget to leave a comment!