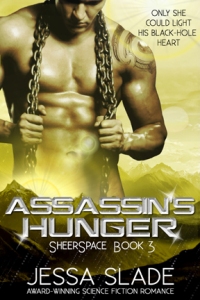 Only she can light his black hole heart

A killer with a heart of gold

Stripped of her identity, her memories, and half her body by a cybernetic mercenary corporation, Shaxi was a mindless killer unleashed at the behest of any who would pay. When the corporation was destroyed, she was finally set free from her deadly programming. Now adrift and alone, she desperately needs to master her unlinked enhancements before she succumbs to a rogue madness. And on a desert outworld she hopes to find a second chance.

A savior with a soul of ice

But the electromagnetic storms that might save her also blow in the Asphodel, a sheership with more mysteries and menaces lurking in its shadows than Shaxi has ever faced…including the enigmatic Eril Morav, a heartless assassin on a quest to save the sheerways. Eril will sacrifice anything–including Shaxi and his last chance at peace–for his noble mission… even though she is the one being in the universe who reminds him what it means to be human.

The shriving storm was so close now. In its electromagnetic chaos, she would find new purpose.

Or she would die, with her flesh and biotics stripped away by the alien wind.

Through her ocular implant, on’Taj Shaxi tracked real-time data on the approaching tempest while her naked eye focused on the cantina’s simulated window.

What was the point of a sim that showed reality? It could have displayed a serene ocean, or a lush field, or at least one of the desert oases allegedly hidden out in the sands of Khamaseen. But no, the screen with a crack running through one corner featured an unapologetically desolate and utterly true view of squat pre-fab buildings, their plyscrete roofs rounded like shoulders hunched against the rising wind. Levare was the only city on the half-terraformed moon with a functioning spaceport, but any distinction that might have implied had long ago faded to jaundiced yellow under the double suns.

Just as whatever value she’d once had was lost.

Not even static. The doomed silence left her hollowed, and she took a long swig of the fermented beverage the locals favored, grimacing at the sour tang. If she didn’t find a way to amend her programming to reflect her new reality, the silence would overtake her.
Sometimes she felt it already had. It’d been days since she’d spoken to anyone. Her one clumsy attempt at communication with the bartender had been rebuffed with a grunt and a leery stare.

She should’ve been used to that by now. A Hermitaj commando was nothing without her programming. Worse than nothing, she was a menace. Left without a mission, she was like a plasma charge, safety off, timing ticking, lying abandoned in the street.

So when the cantina’s double doors slammed open—no smoothly irising portals on Khamaseen, thanks to all the grinding dust—she refocused her gaze with a flash of interest, squinting against the desiccating heat that rolled through. For all its borderworld roughness and fabled destructive storms, she’d found Khamaseen to be depressingly quiet. She hadn’t had an excuse to stretch her muscles or draw a weapon to soothe her tension since her credits had run out and stranded her in Levare.

But the two slender figures in matching sand-robes poised between the wide-open doors undermined the violence of their entrance. Shaxi never underestimated the potential ferocity of a smaller opponent, but these girls—she knew they were female by their center of balance and the fact their sand-robes were bright pink—moved like little kitlings, bristling with unfocused energy.

Levare might be mostly quiet, but kitlings shouldn’t be out on their own—ah, there was their bodyguard coming through the door. The man had good armament, Shaxi noted, and the watchful stance of a seasoned fighter, but the way he trailed behind the girls like a half-forgotten scarf made it clear who had the real power.

“Close the thrice-tangled doors! You’re letting in the sand.” Down the bar, the bartender clanked a semi-clean glass down on the plyscrete surface, drawing Shaxi’s eye to an old hazer burn scoring the sturdy material.

The girls’ companion closed the door behind him while the two made their way into the cantina, folding back their hoods as they spoke to each other in muted voices. Shaxi felt the slight inhalation around the room from the other occupants—like a precursor to the scorching carnage of the shriving winds.

She’d already analyzed the two small groups of men seated at tables at opposite sides of the low-ceilinged room: one trio and another group of five, all outfitted as locals, although she suspected at least two among the quintet were off-worlders judging from the way they struggled with the unwieldy drape of their sand-robes.

They’d all studied her briefly when she’d arrived, and then dismissed her. The same as she’d dismissed them, despite the stab of longing for her lost companions that urged her to approach them, if only to exchange ritual words of greeting and opine on the weather.
But she’d learned how a simple desire for company might be misconstrued. Though their eyes had lingered for a split second on the curve of her hips, her hazer pistol prominently displayed there had been warning enough.

The on’Taj patch on the breast of her combat jacket, even worn and frayed, was its own disincentive to trouble.

But these newcomers, despite their soft voices, they screamed trouble.

One was fair-haired and the other dark. Both had a winsome, ingenuous beauty in their refined features that Shaxi knew she’d never possessed, not even before the cyber-embeds had made her a killing machine. For all their obvious youth, there was a simmering edge to their loveliness, and their very presence seemed to slow the molecules in the air to a sensuous churn. The blonde laughed, like a trill of bells.

Shaxi’s spine tingled in response to the pure, delicate sound. It was a feeling she associated with imminent danger, not strolling beauties.

What in any hells was that about? She scowled at the bodyguard in disgust. If he’d tripped over his own boots and spilled a satchel of titaniamonds across the cantina’s grimy floor, he couldn’t have been more remiss in his duties.

Unless the girls were the treasure he planned on handing off.

Her fingers settled on her hazer, and her ocular implant zeroed in with grim precision.

The girls crossed the room to the furthest table and confronted a figure sitting in the shadows. Shaxi’s hand spasmed on the cool grip at her side. Tangle it! She hadn’t seen that lone man, and she’d swept the room when she first entered.

Her programming was disintegrating even faster than she’d feared.

The dark-haired girl put her hands on her hips, tightening the otherwise loose and concealing sand-robe around her body. “Is this where you’ve been hiding from us, Mr. Morav?”

If she’d been anything besides a Hermitaj-encoded commando, Shaxi might’ve forgiven herself for the mistake. The man—Morav, the girl had called him—had chosen his seat well to avoid notice, and his dress and demeanor were equally unassuming. His sand-robe was dark enough to match the shadows and grit, but not a swaggering, militant black. Still, for a moment, she wondered if he was wearing body armor underneath. His shoulders and chest were broad enough that he might have been padded, but when he rose to face the girls, his motions were free and unencumbered, and he was definitely tall enough to carry all that muscle without enhancements.

Keeping his hood half pulled up, he dipped his head and kept his voice low, obviously hoping not to draw more attention, but the blonde laughed again. Again with those thrice-shredded bells.

Shaxi forced herself to block out the sound, but it was as if the sim screen had dissolved onto some expansive vista and was enticing her forward, teasing her, promising delights such as she’d never imagined. Her muscles slackened to a lax softness, as if all her years of fighting were wiped away, and she lolled forward…

The distinctive click of a hazer rifle snapped her out of the enthralling trance.