It was my birthday! XY got me an entire mint ice cream cake! Of course I shared — don’t let Monster Girl’s long-suffering expression fool you.

And since one does not simple eat an entire mint ice cream cake without walking it off, we decided to go for a quick weekend camping trip up to the Indian Heaven Wilderness in Washington.

It was an easy Friday afternoon drive from Portland east to the Bridge of the Gods and across to Washington and up to the Gifford Pinchot National Forest.

We stayed at the Cultus Creek Campground which let us get an early start on the hike. The trail was steep — I’m a wimp — but at a mile in we got this beautiful view of Mt. Adams. We tried to guess how far away it was but due to a GPS failure had to wait until we got home to check: 17 miles approx. So…a hike for another day? 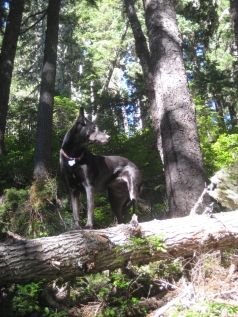 The mosquitoes and flies were troublesome in areas, which kept us on the move, but it was perfect hiking temps: warm in the sun, cool in the shade, with a bit of a breeze.

She and I posed for a glamour shot near a heathery meadow just before Cultus Lake. Fabulous wilderness hair by 100% DEET! 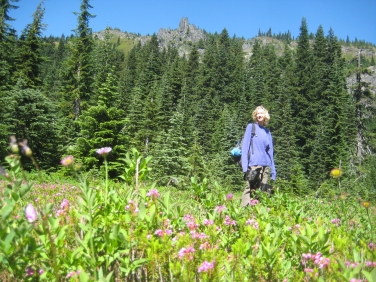 (JK. Beauty bloggers never tell you all their secrets, but that ends now! It was only 98% DEET plus lemon eucalyptus essential oil bug spray.

If you arrive at this post because you are thinking of doing this hike in July, don’t bother with that wimpy all-natural stuff. Live a good life the rest of the time and save your chemical exposure for important moments like July in Mosquito Heaven Wilderness. /PSA)

There were lots of glamour shots from summer flowers, including heather, Indian paintbrush/prairie fire flowers, cinquefoil, blooming bear/basket grass, and (not pictured) aster, lupine, columbine, and avalanche lily (how evocative is that name?). 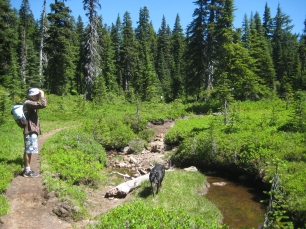 Since we got such an early start (and the bugs were too insistent to let us stop) we continued past Cultus Lake toward Lake Wapiki.

The Lake Wapiki overlook offered another dramatic view of Mt. Adams. As if to distract us from upcoming the sudden, severe elevation loss. After 3+ miles of elevation gain, I swear we lost all of it in 1+ mile down to Lake Wapiki. If whoever blazed that trail is reading this: that was not a good birthday present. 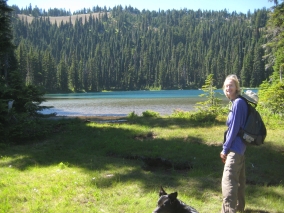 With slightly worse-for-wear hair, here I am on the shore of Lake Wapiki. See that brown cinder line in the upper left corner of the photo? That is the lake overlook, where we were standing in the photo above. A long. way. down.

And then — cosmic balance being what it is — a long. way. back. up.

Longer, actually. Not sure how that works. Thanks a lot, cosmic balance.

Me, sucking wind, not even close to regaining that lost elevation. There is a metaphor for birthdays in there somewhere. 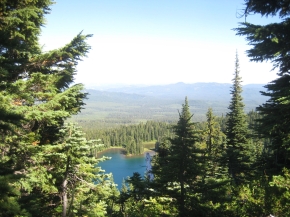 See that little curve of lake to the left? That is where I was standing when I took the photo above. I’ll never get those aching footsteps back!

All that climbing and dropping meant that even though the mint ice cream cake wasn’t able to accompany us on our camping trip due to not having a freezer in the car, we were able to justify a yummy camp stew of onions, garden peppers, farmers market tomatoes (garden tomatoes aren’t ripe yet), and chorizo.

Normally when we camp, we’re out later in the year when fire restrictions are in effect. But fire danger was low in this area and we were staying in a real campground with a fire ring, so we powered up a smoky fire to combat the bugs.

Luckily whoever had the spot before us left a bunch of wood. Worked great.

But since you can’t sleep in a smoky fire… 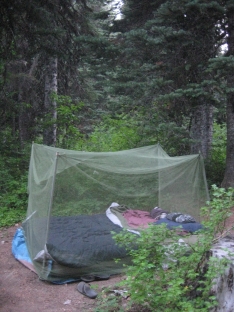 It’s kind of like a birthday princess bed but the netting serves a very real purpose.

After dinner we all settled down to a well-deserved sleep.

Except of course I had to wake up in the middle of the cold, cold night to pee. But I saw something glowing in the darkness and discovered in the old firewood some bioluminescent lichens (?).

No good night photos, but I took some in the daylight. I returned those chunks to the forest so the next campers can wonder what’s glowing out in the darkness.

After seeing probably a dozen different views of Mt. Adams and other peaks, our drive out the next morning was a reminder to get back to work. The clouds rolled in and hide the mountain, and now I’m back at my computer.

Still got some mint ice cream cake left over though. 🙂 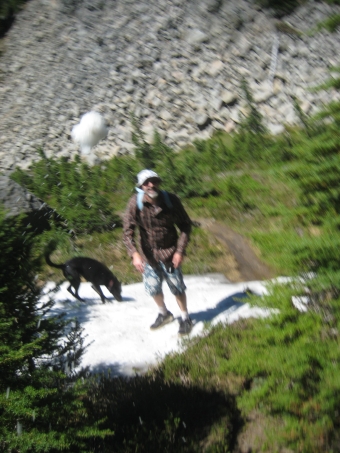 Where there is snow, XY will throw a snowball. Blurring due to running away.